When I lived in Berlin there was this stir fry place near my office that I was completely obsessed with. I spent a good amount of money there over the months and the shrimp yaki udon was one of my favorite stir fries. While I had some delicious noodle dishes in Japan, it’s this Berlin version that really sticks with me. I had a real hankering for it the other day so I decided I’d try to recreate it and I was not disappointed.

What is Shrimp Yaki Udon?

Yaki just means a stir fry. A literal translation is more like ‘heat’ or ‘burn by fire,’ but in English we would just use the phrase stir fry. You may have heard of yaki soba, which is a bit more common and is essentially the same dish but with soba noodles instead of udon noodles.

An udon noodle is made from wheat flour and is thick and chewy. Udon noodles also come in the round version (like this) as well as a flat version. For some reason, I had a heck of a time trying to find the traditional thick, round version, so I made this recipe with the flat udon noodle. However, you could make it with both and it would be delicious either way.

A soba noodle, on the other hand, is made from buckwheat flour and is therefore a little grainier in texture. It’s also thinner than an udon noodle so you don’t get as much chewiness. 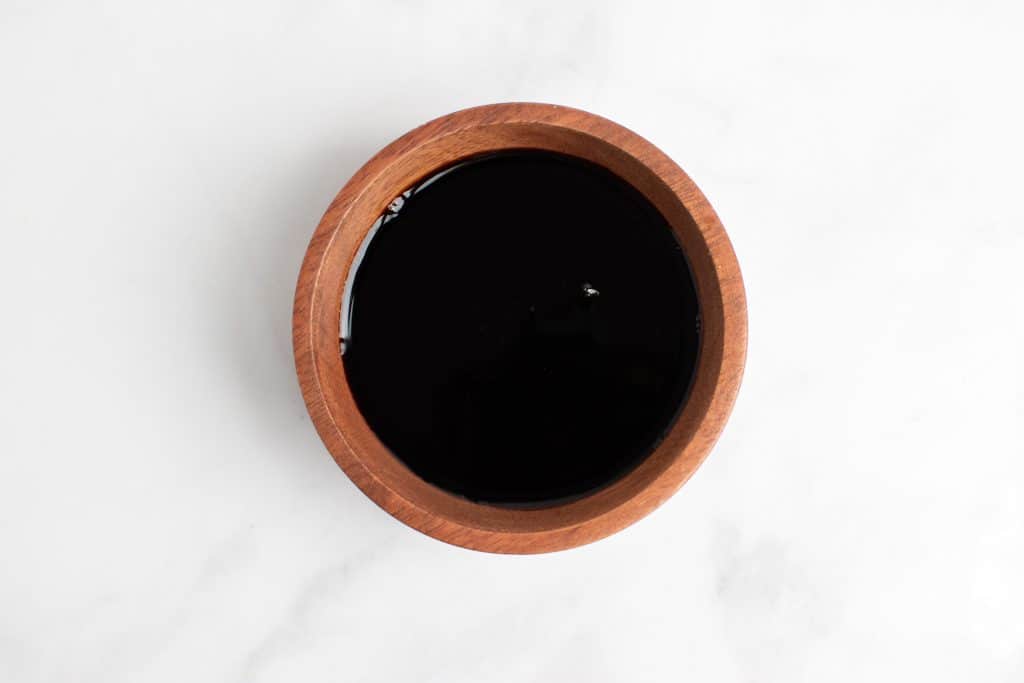 What makes this sauce a little bit sweet (and delicious) is the addition of brown sugar. There isn’t too much added since the sauce also contains oyster sauce, which contains a little bit of sugar as well.

How to Make Shrimp Yaki Udon

Making this stir fry is actually pretty simple and doesn’t take much time at all. It’s also the kind of dish that’s really easy to scale up so it would be perfect for a crowd or a family. First, start boiling your water for the noodles. They’ll only take a few minutes, but bringing the water up to a boil first will make things go quicker.

Then, cook the shrimp for a few minutes on each side until done, then set aside. You’ll know they’re done when the shrimp turn pink in color. 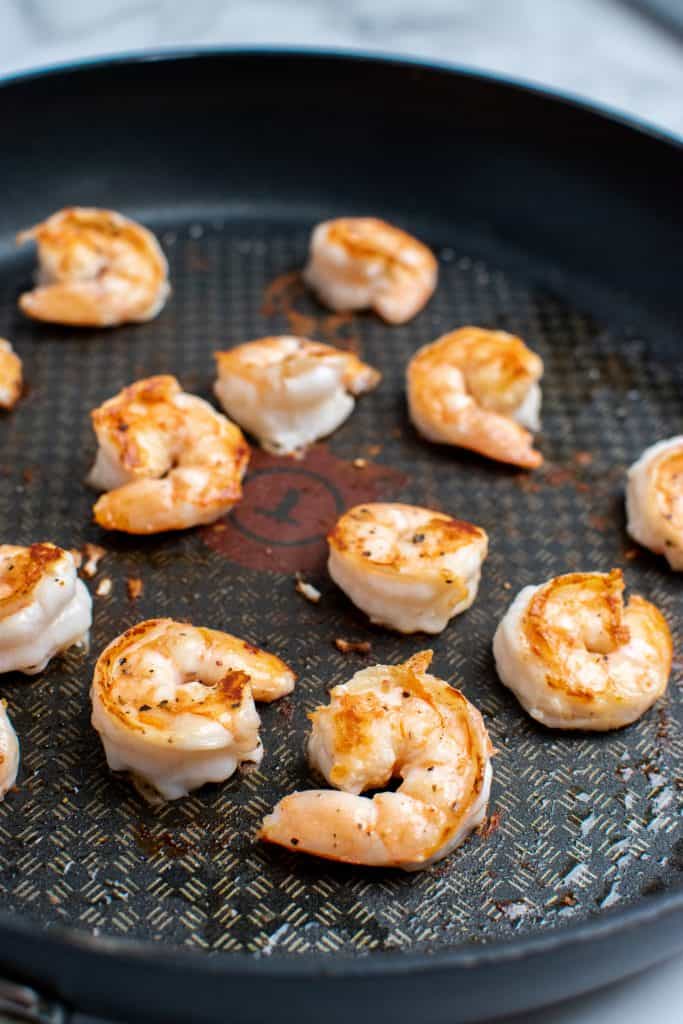 While the shrimp is cooking I like to add all the sauce ingredients to a bowl and mix so its ready to add later. Then get started on chopping the vegetables and garlic. You’ll sauté the vegetables for about 5-8 minutes until they’re cooked down and soft. It won’t take long since the julienned vegetables are so small.

While your vegetables are sautéing, now is the perfect time to cook your noodles, following the directions on the packet.

I like to add the sauce to the vegetables and cook for about 2-3 minutes to make sure the sugar dissolves and the sauce has the chance to thicken. Finally, add your noodles and shrimp and mix well to coat evenly in the sauce. 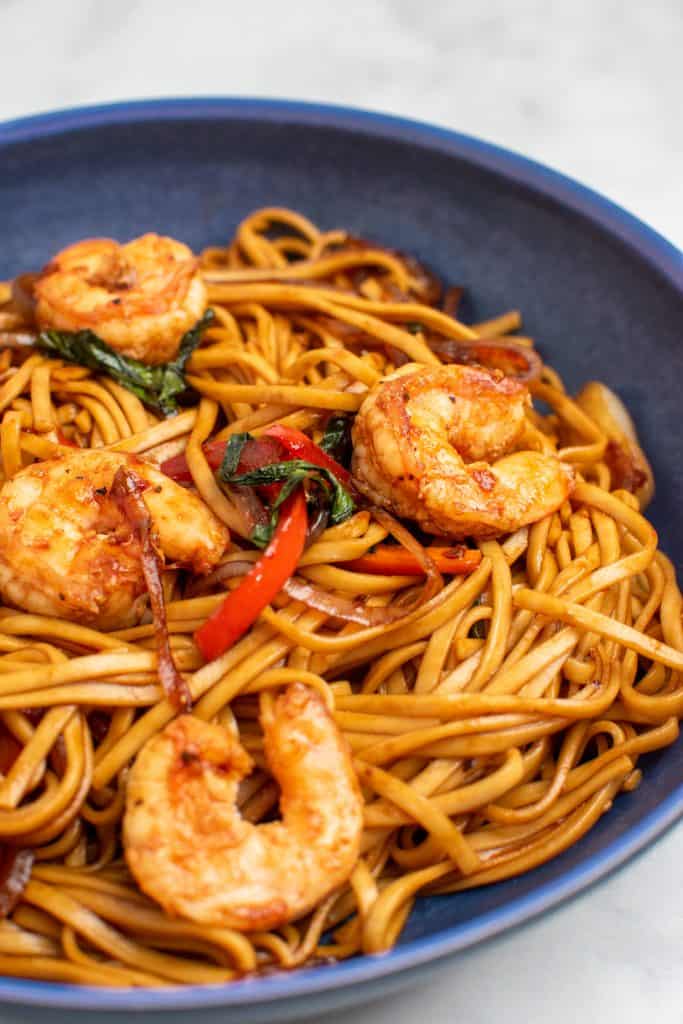 Any leftovers can be stored in an airtight container for up to four days in the fridge. To reheat, you can put in the microwave for a few minutes or heat it up on medium heat on the stove, covered, for around 5 minutes. 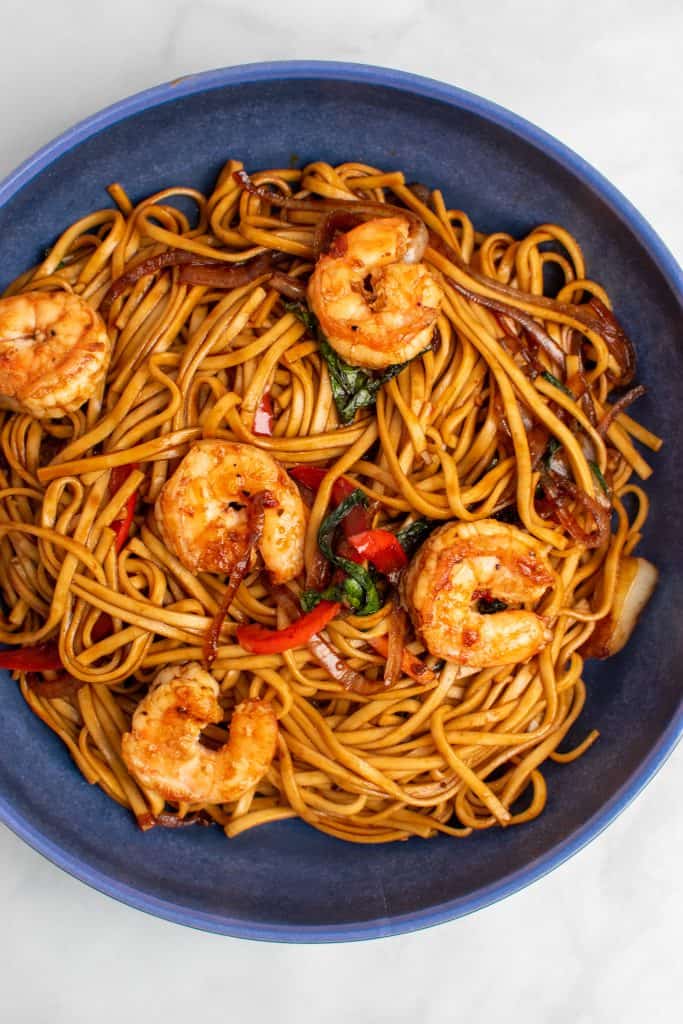 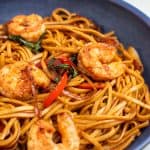 Teriyaki Salmon in the Air Fryer