When I visited Japan, one thing I knew I would never forget was tuna onigiri. Truthfully, I had never heard of onigiri until I visited Japan and I probably ate like 100 while I was there. Ok, maybe not 100, but a lot! I would seek them out in every shop we were in because they were the perfect on-the-go snack. Not to mention, they were pretty cheap and if I can save a few bucks here and there, I’ll do it.

Tuna onigiri are my favorite, even though there are many different fillings to choose from. There’s a Japanese store near me that sells onigiri, but I finally decided I want to make these for myself rather than having to buy them. And let me tell you, the first times I tried to make these, I did not succeed. However, with some adjustments I finally nailed it, so later in this post, I’ll go through some common mistakes and troubleshooting when making your onigiri.

Rice balls date back centuries and it was in the 1600s during the Edo Period when nori was added to rice balls to make them less sticky to eat on the go. Then onigiri was popularized in Japan in the 1970s and started appearing in convenience stores as a snack or easy lunch. Sometimes Japanese onigiri is confused with sushi, but even though they both use sushi rice they are not the same. Sushi rice contains vinegar, sugar and salt, whereas onigiri uses plain, steamed rice. 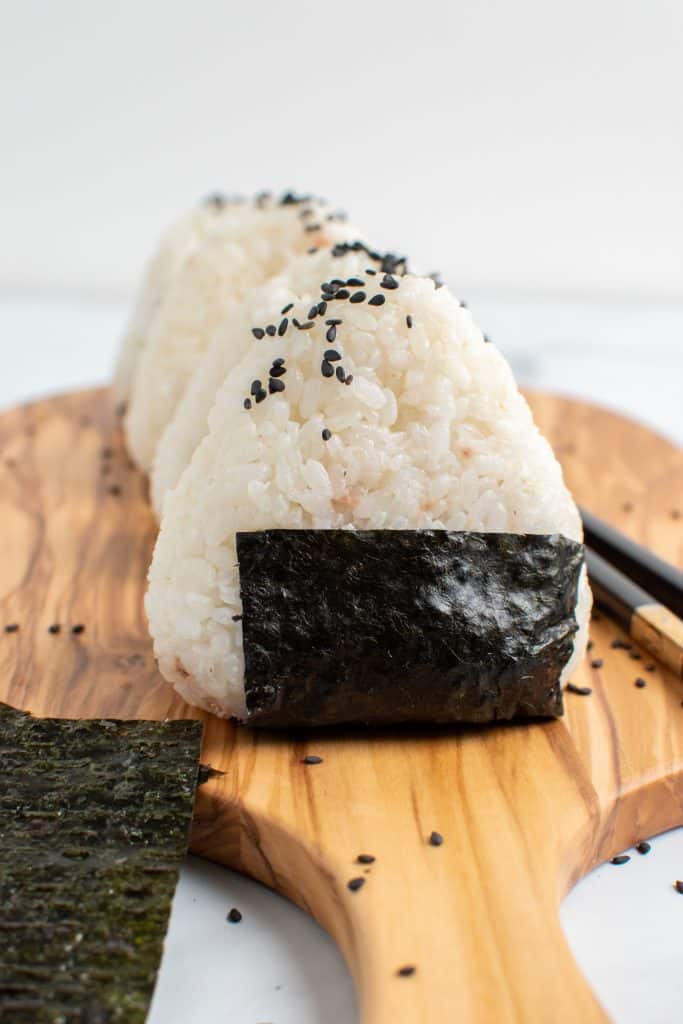 I opted to make tuna onigiri, which consists of tuna and Japanese mayo, but there are so many other onigiri fillings to choose from. Including, but not limited to:

More contemporary fillings get creative by using shrimp tempura, vegetables and other fillings. Ultimately, you can make your onigiri however you want to. 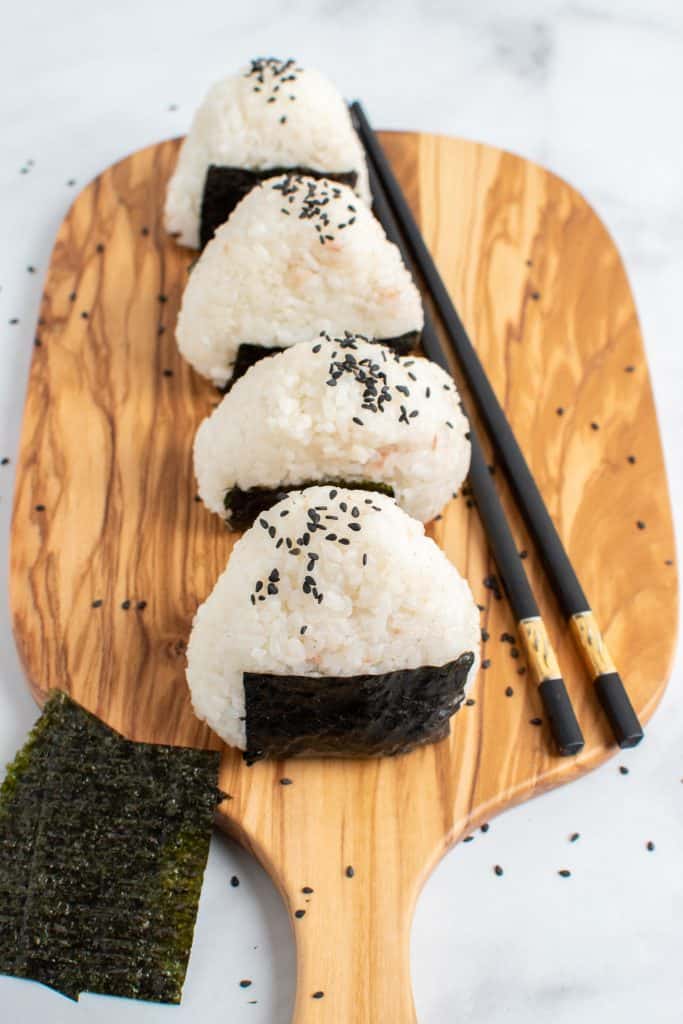 The ingredient list for tuna onigiri is pretty short, which is great!

How to Form Onigiri & Troubleshooting

There are a few really important parts of forming the onigiri that you can’t deviate from.

For starters, the rice. Make sure you cook the rice with a ratio of 1:1.1 or 1.2. That means for every cup of rice you’ll want 10-20% more water than rice. For example, 1 cup of rice is 180 ml, which means you’ll want 200 ml of water. The first time I made this recipe, I undercooked my rice a smidge and that made it impossible to form into the shapes.

Also, you’ll want to rinse your rice like you normally would, but don’t overdo it. You actually need some of the starch in the rice for it to be sticky. I find two or three rinses is plenty and any more than that I find it’s not as sticky.

Finally, you want to make sure your rice is still warm, borderline hot, when forming your onigiri. If the rice has had time to cool it won’t stick together very well. This means while your rice is cooking you should prepare your workstation. You’ll need your tuna mayo in a bowl, a small bowl of salt and a bowl of water.

For forming the onigiri, there are a few steps. Make sure to wet your hands before handling the rice because it will help the rice stick to itself rather than to your hands. Then rub some salt on your hands and that will act as the seasoning for the tuna onigiri.

Scoop out about 1/2 cup of the cooked rice into your wet, salted hands and loosely form a ball. Make sure you’re not applying too much force to the rice or you’ll just crush it and it won’t stick together (I made this mistake). Form a small hole in the center, add around two teaspoons of the tuna mixture and fold it back up into a ball. 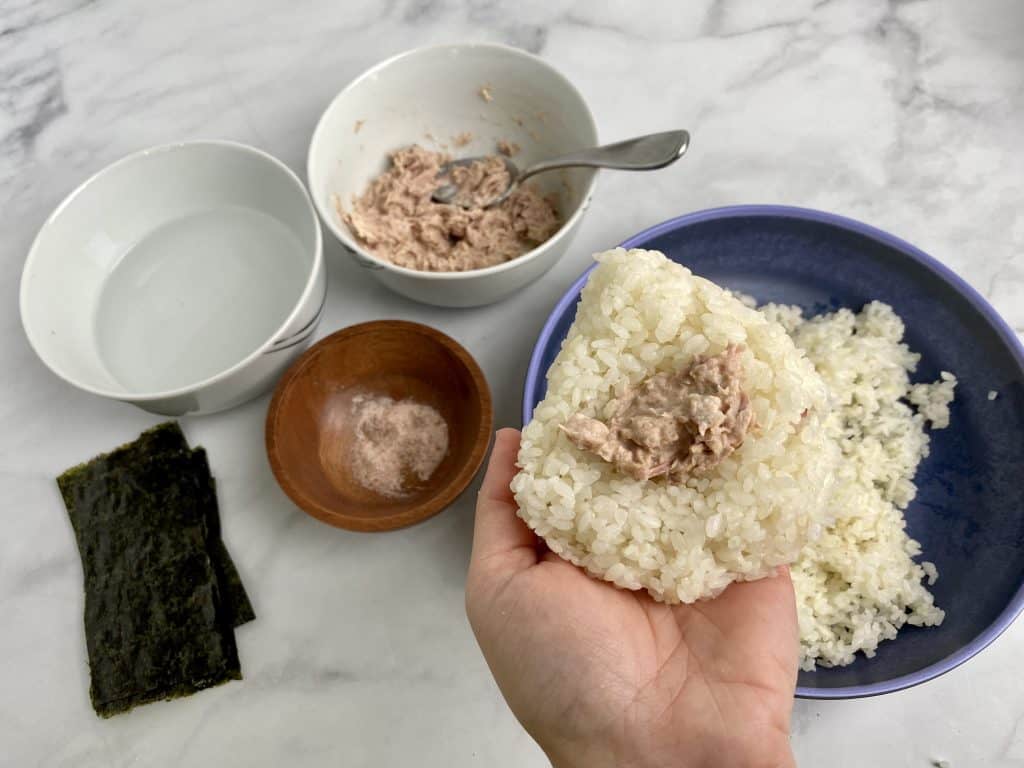 To form the triangle shape, I found the best way to do this was to press the rice between my thumb and pointer finger on one hand and press down with my thumb on my other hand and then rotate. 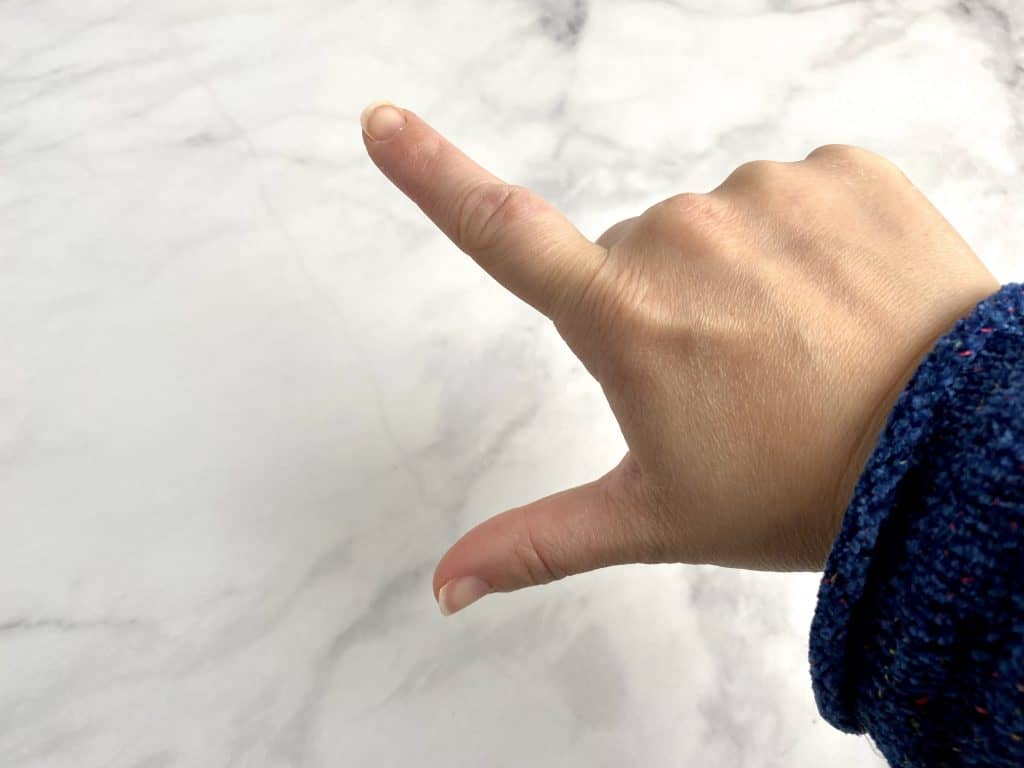 You’ll see the space between my thumb and pointer finger is triangle-y, and that’s exactly what you need for the three soft corners of the onigiri. It may take a few tries, but you’ll get there! If you’re struggling to form the onigiri, you can add a few more drops of water to your hand to make sure the rice doesn’t stick to you.

If all else fails, these are still absolutely delicious in a ball shape too!

The final step for the onigiri is to add a strip of nori to the base. To form the strip, cut a sheet of nori into three strips and then cut each strip in half.

Ideally, you’ll only make as much onigiri as you want to eat on the day since sushi rice will get hard in the fridge. However, if you want to make it ahead a day then wrap it in a damp paper towel and wrap that in a kitchen towel to protect it from the cold fridge.

My fridge has a tendency to run pretty cold so I find the onigiri don’t hold up too well. They’re still edible, but the rice is usually a little harder than I would like. 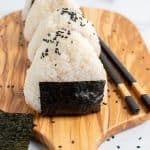 *Some tuna is a bit wetter and depending on whether you purchase skipjack or albacore I find the amount of mayo needed can be different. Start with 1 tablespoon and then decide if you need the second.
Pin19
Share
Tweet
19 Shares
0 comment
1
FacebookTwitterPinterestEmail
previous post

Teriyaki Salmon in the Air Fryer